The Vice President of WFD* came to Kazan for the DeafSkills National Professional Skills Championships and answered our questions.

The World Federation of the Deaf (WFD) is an international non-governmental organization that acts as a peak body for national associations of Deaf people, with a focus on Deaf people who use sign language and their family and friends. WFD aims to promote the Human Rights of Deaf people worldwide, by working closely with the United Nations (with which it has consultative status) and various UN agencies such as the International Labour Organization (ILO) and the World Health Organization (WHO). WFD is also a member of the International Disability Alliance (IDA)

COMPETITION OF PARTICIPANTS IN DEAFSKILLS

Representatives of 57 Russian cities took part in the competition in 26 professions.

More than 220 people from 57 cities of Russia participated in competitions in 26 competencies. Their performances were evaluated by 130 experts. The 1st National DeafSkills Professional Skills Championships for people with hearing impairments was held in the capital of Tatarstan until December 11.

DEAFSKILLS IN KAZAN: THE DEAF CAN DO EVERYTHING

DeafSkills National Championships 2021: the world's largest event dedicated to vocational education and employment of the Deaf.

The Deafskills International Conference was held in Kazan

More than 200 participants from 7 countries discussed the problems of employment, education of the deaf and adopted an important resolution.

The world's first championships of young professionals with hearing impairments has begun in the capital of Tatarstan.

The first National DeafSkills Professional Skills Championship for people with hearing impairments will open today in Kazan in the concert hall of the Universiade Village. Its participants will be more than 220 people. This was announced today at a press conference in the Tatar-Inform news agency by the Minister of Labor, Employment and Social Protection of the Republic of Tatarstan Elmira Zaripova. 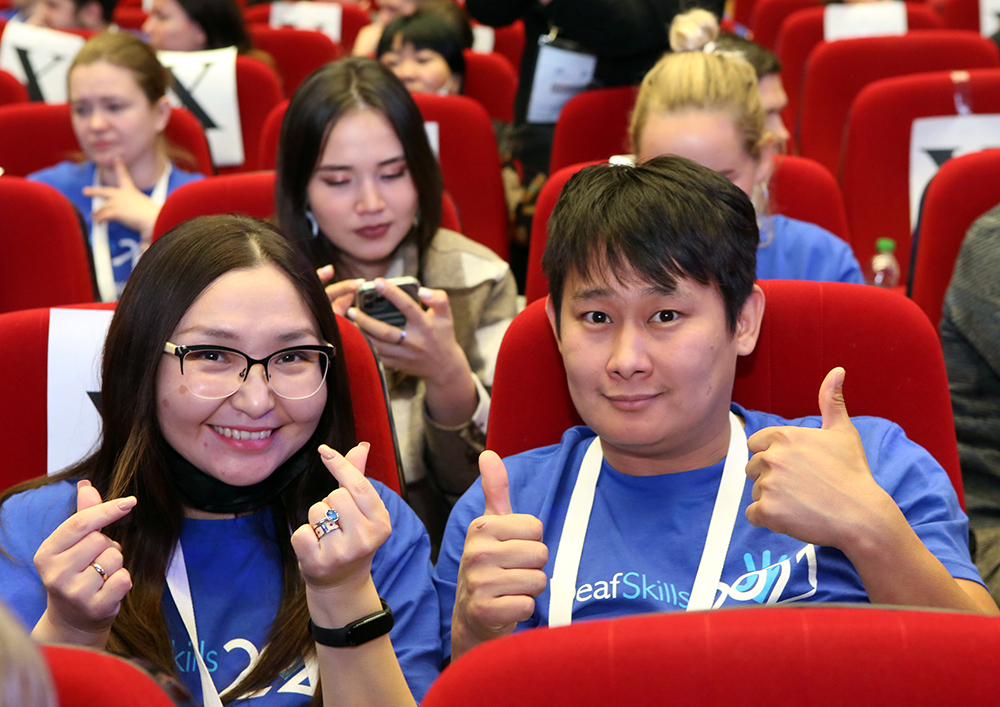 Kazan, Russia - On December 9-11, 2021, Kazan hosted the First National DeafSkills Professional Skills Championships, which was attended by hearing-impaired people aged 18 to 35 years. The championships were organized by the All-Russian Society of the Deaf (VOG), the Government of the Republic of Tatarstan, the World Federation of the Deaf, the Interregional Public Organization of the Disabled, the youth organization of the Deaf "Success" with the support of the United Nations Democracy Fund.

In 2017, a demonstration Russian DeafSkills championships were held in Kazan, in which about 80 participants competed in ten popular professions. In 2018, the youth organization of the Deaf "Success", which is the Russian branch of the DeafSkills International Association, won a grant from the United Nations Democracy Fund to host the first official National Championships in Russia. It was supposed to take place on April 25-26, 2020 at the Crocus Expo Exhibition Center in the Moscow region, but due to the coronavirus pandemic, it was postponed to December 2021.

According to Stanislav Ivanov, President of DeafSkills International Association, DeafSkills promotes the development of professional skills of young people with hearing impairments and promotes their future employment, as well as will draw public attention to the problems of hearing disabilities.

This year, more than 200 people competed for victory in professional competitions in 26 competencies. Their performances had evaluated by 130 experts.

The competitions were held at four venues organized based on specialized centres for the development of competencies "WorldSkills" and "Abylimpics": Kazan Construction College, Kazan Trade and Economic College, Kazan College of Folk Arts and Crafts, MCC-Kazan College of Information Technology and Communications.

The opening and closing ceremonies of the DeafSkills championships were held in the concert hall of the Volga State University of Education, Sports and Tourism. 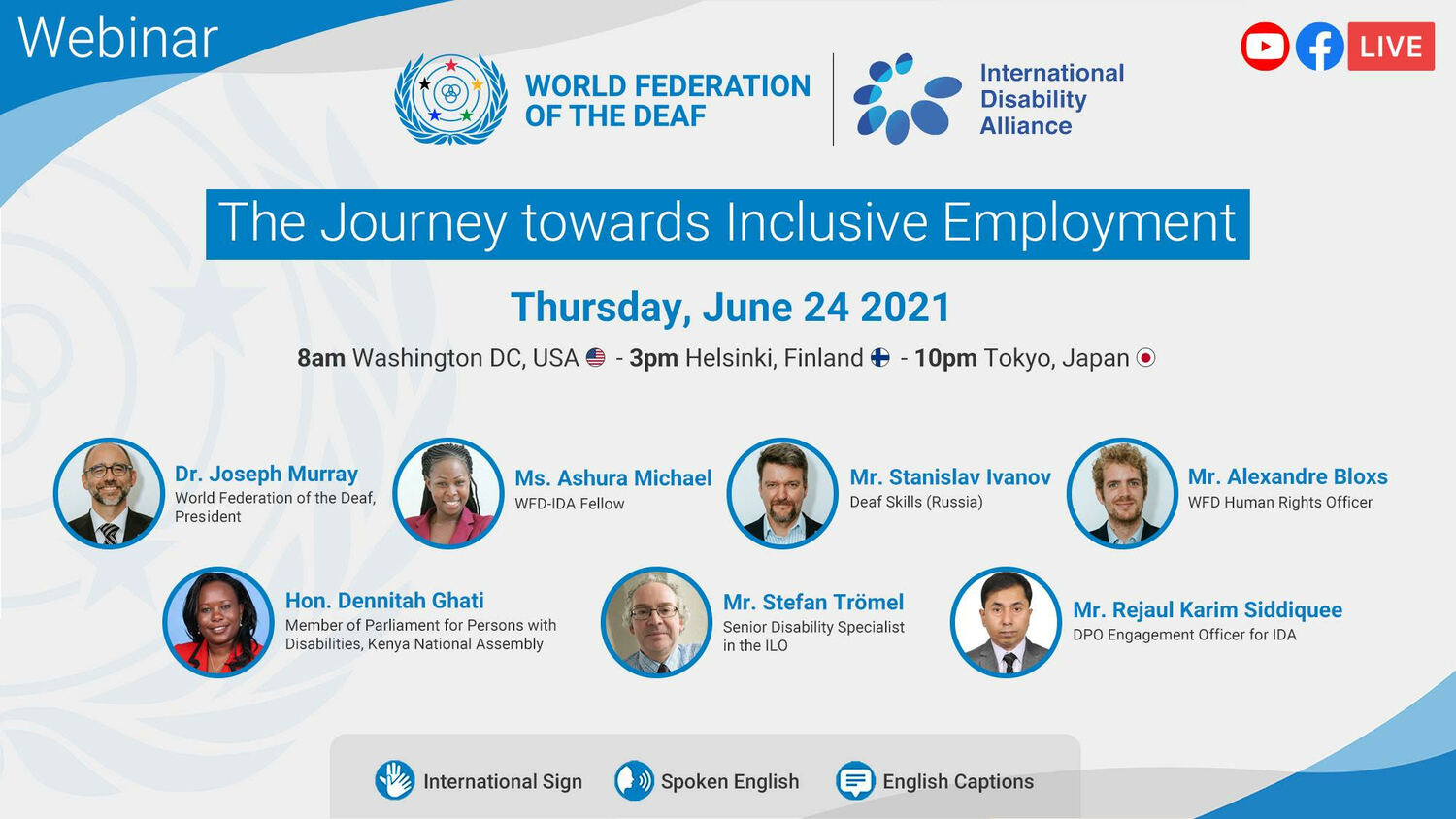 In celebration of the 70th anniversary of the organization's founding, the WFD is hosting monthly webinars covering a variety of important topics in the field of ensuring the rights of deaf people. The webinars aim to raise awareness and provide some guidance to National Associations of the Deaf, governments, various stakeholders, and the general public about the challenges that Deaf people face in participating in all walks of life in national sign languages ​​and in exercising their rights.

The WFD discusses with a variety of experts from around the world how best to overcome these barriers, including sharing some best practices from both governments and civil society organizations and other key stakeholders around the world. The topics of the webinars touch on important aspects - inclusive education, interpretation into sign language, gender relations in the world of the deaf and employment.

One of the webinars took place on Thursday 24 June 2021 under the theme "The Path to Inclusive Employment!" and was devoted to the difficult problem of employment. One of the panellists (speakers) was the President of DeafSkills, Stanislav Ivanov, who outlined the scope of work carried out by the DeafSkills organization on employment and employment promotion for deaf people through various initiatives.

As participants in the discussion, in addition to the President of the WFD Joseph Murray, authoritative experts in the field of inclusive education and employment were also invited, such as Ashura Michael (a member of the WFD and the International Disability Alliance), Alexandre Bloxs (an employee of the WFD for human rights), Stefan Trömel (a senior Disability Specialist at the International Labor Organization) and Honorary Member of the Kenyan Parliament, Dennitah Gati. At the same time, with the support of the youth organization of the Deaf "Success", the all-Russian championships for professional skills "DeafSkills" will be held. On April 25-26, the National DeafSkills Professional championships for Deaf and Hard of hearing young people under 35 age will be held at the Crocus-Expo exhibition complex in the Moscow region.

President of the DeafSkills International Association, Mr. Stanislav Ivanov, for the first time attended the European Union of the Deaf During EUD seminar, Mr. Ivanov, highlighted the importance to EUD members and other official representatives:

Throughout two working days, Mr. Stanislav Inanov along with Ms. Lidia Frolova, Vice-President of DeafSkills, and Mr. Slava Klimov, Coordinator of International relations and Media, interacted with other EUD members and answered their questions and concerns.

DeafSkills is looking forward to the fruitful cooperation with EUD in the future.

We would like to thank the EUD board member and Romanian Society for the Deaf for their hospitality throughout the day.

The Professions for the upcoming DeafSkills Championship are selected Last week we organized a meeting of the working group of DeafSkills Championship-2020, which is supported by UN grant. The members of the working group discussed and selected the list of professions most relevant for the labor market and the most popular for the deaf people.

Congratulations to Colin Allen! President of the DeafSkills International Association Stanislav Ivanov is proud to have cooperation and friendship with such incredible person! At Baykal International Forum of Inclusive Education DeafSkills established contacts with the most famous universities of France, Portugal and Italy, where reside the great experts of special education for disabled. Thank you, colleagues!